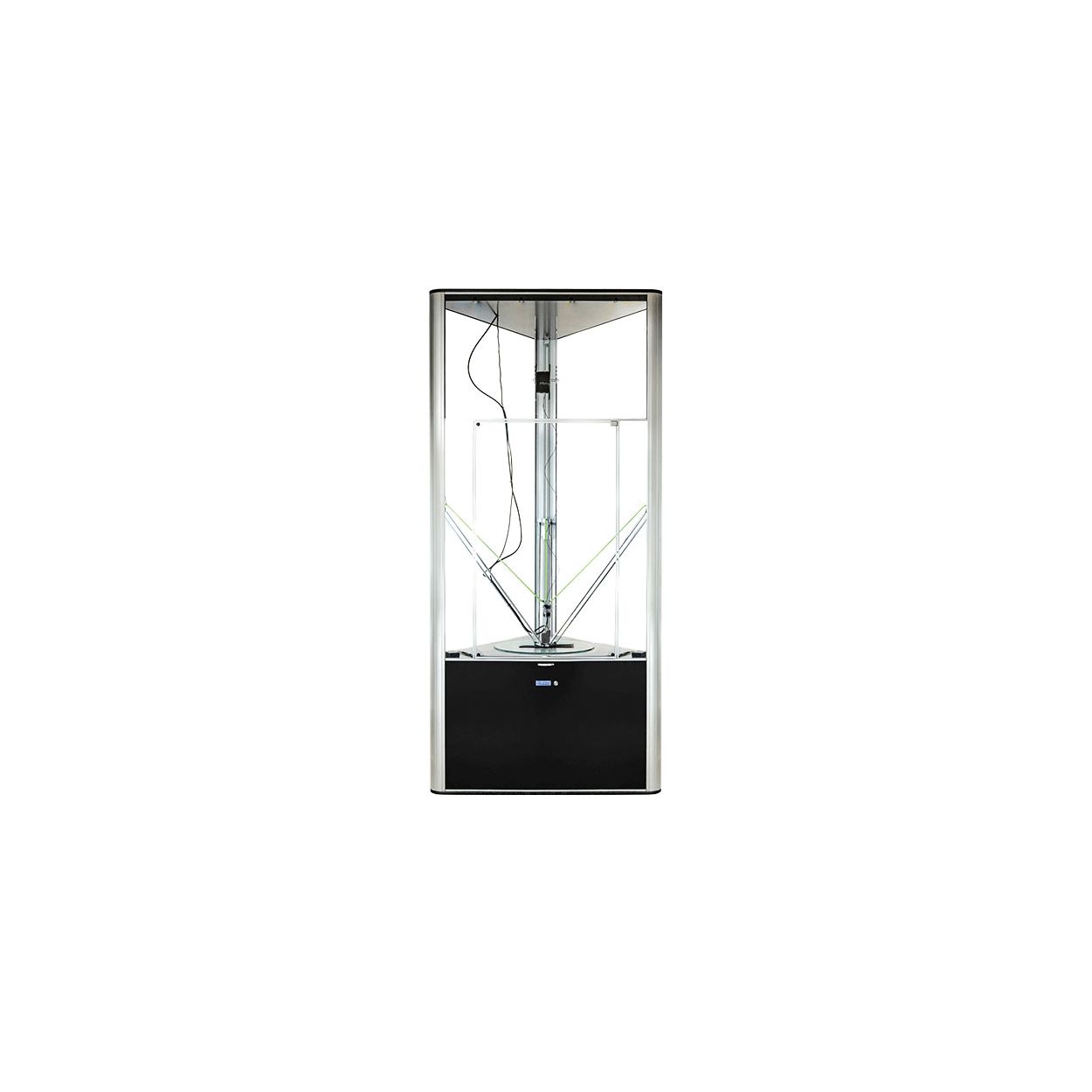 The Delta WASP 60100 3D Printer is the second largest of the WASP Industrial 3D Printer line, the Delta WASP 60100 3D Printer was developed for companies and professionals who are in need of larger size print production which is also rapid, accurate and precise. Ideal for small series internal productions and rapid prototyping activities, it has the capacity to print a cylinder print circumference of 600mm x 1000m height.

The Delta WASP 60100 3D Printer is not only the second largest industrial 3D printer supplied by Daemon3D Print, but also the second largest manufactured by WASP. Offering a maximum cylinder circumference build of 600x1000mm and a maximum height build of 1000mm, helps to bring your larger scale designs to life.

The signature feature of Wasp’s 3D printer line is its combination of the Delta Geometric System with its Suspended Bowden System. Other FDM 3D printers work on the Cartesian System providing an x, y, and zed axis. The Delta WASP 60100 3D Printer uses the Delta Geometric System, which consists of 3 main arms connecting to the extruder, which move up and down independently. The position of the extruder is estimated by using trigonometric functions. This causes the vector of movement to be more precise as inertia is intrinsically lowered.

Especially noticeable in Cartesian Systems, the inertia surrounding the extruder can cause inaccuracy in 3D prints. WASP developed the Bowden System to further disperse the inertia onto hanging rubber-bands, which have improved the printing, the speed and quality on the Delta WASP 60100 3D Printer.

The Spitfire Black Extruder is supplied as standard with an LT 0.7mm heater cartridge on the Delta WASP 60100 printer. The innovative WASP Spitfire System leads to a whole new generation of extruder for 3d printer: the modular architecture allows to mount a specific cartridge and nozzle for your needs. The SPITFIRE System is equipped with a new resistance that can bring the nozzle temperature up to 350 ° C, for printing more technical materials. The range of materials you can now print with the black spitfire is PLA, PETG, ABS, ASA, PVA, HIPS & Polypropylene.

The Clay Extruder Kit 2.0 is a LDM (Liquid Deposit Modelling) professional kit for fluid-dense and ceramic materials. The Clay Extruder Kit 2.0 has the ability to eliminate air bubbles in the mixture before it is extruded. The Clay Extruder Kit 2.0 includes a 3 litre tank (which can be substituted with a 5 litre one). Inside, there is a piston with two 4 bar gaskets, this pushes the material through the teflon pipe (diameter 12mm) and supplies the extruder. The cap located on the back has a safety valve set at 8 bar. This is an optional piece of kit that is compatible with the Red Spitfire Extruder.

*When printing with dense materials on clay 3D printers, you will need to use an air compressor to get rid of all the air bubbles in the material tank, this is so the mixture can flow through the extruder smoothly without any breaks. You can use any EU specified air compressor with 3.5 - 5.5 bar pressure, which you can get online or at a hardware store.

With the Delta WASP 60100 3D Printer you can choose from the Black Spitfire Extruder (doubles the printing speed), Fluid Dense Extruder (print with concrete, porcelain and clay), or the Basic Extruder (fine and high-precision printing). Nozzles are heated for optimal extrusion of polymeric filaments, or kept cold for semi-fluid materials. All extruders can easily be exchanged on the Delta WASP 60100 3D Printer in one minute and can be done so mid-print.

The new stabilisation system on the Delta WASP 60100 3D Printer provides an extra three arms for a total of nine, instead of the original six, further dispersing inertia equally away from the extruder, for increased speed, accuracy and precision.

The Resurrection System is an auto-save and back up feature on the Delta WASP 60100 3D Printer, which allows you to stop 3D printing before completion and continue hours, days or weeks later from where you left off. The need to stop or interrupt print production and to get back to it in the future at the same point where it was left has been the motivation to create this new implementation. By interrupting the track to the Arduino with 12 volt and have added a diode and a 10.000 µF-condenser (little battery), WASP have evolved the function of “stop and save.”

The Free Zed System is a recovery process on the Delta WASP 60100 3D Printer useful for clay and prototyping which gives you the ability to start printing from anywhere within the 3D print’s instructions. It allows you to print a file starting from a precise height of the model to be printed, as long as the height was previously selected. Essentially giving you the ability to print the one half of your design and then begin a new print of the second half on the Delta WASP 60100 3D Printer.

Using 100% Aluminium and Coated Iron, the entire build of the Delta WASP 60100 3D Printer is made of industrial grade steel. Providing the most durable and reliable foundation for production also brings significant noise insulation.